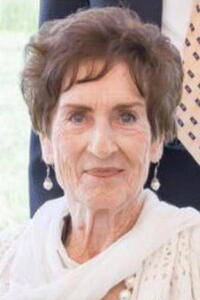 Patricia A. Barnett, 82, died at her family residence in Nacogdoches on May 18, 2022. A number of ailments finally quieted her fierce and loving heart. Donald Wayne Barnett, her husband since Valentine’s Day 1957, was the first to return home 12 years ago. Pat was born in the hamlet of Blackland Prairie in Kerens with five sisters and one brother. Her parents, Helen and Jack Anderson, tried their best to guide their second daughter, but the headstrong Pat reportedly succeeded. Leading the Bobcats as a twirler and cheerleader put her in the spotlight. She found that she liked it there. Pat’s self-confidence made her sure of many things, including her love for a handsome thug who had also grown up in Kerens. A tough rig operator who struggled to get drill rods to the top of the rig tower, Don never stood a chance. A whirlwind romance led to wedding vows. Nine months later came a son, Donald Blake. His son Barry Craig and daughter Melanie Leigh followed in 1959 and 1966. After the family left the oilfield for the pine woods of Nacogdoches 63 years ago, Pat and Don became pillars of the community. Pat worked for many years as a secretary at Westminster Presbyterian Church, taught Sunday school, attended session, sang in the choir and rarely missed a worship service. She also managed the office of Dr. Larry Walker while earning a BA at Stephen F. Austin State University. In 1999, she began a 20-year stint strengthening the Music Prep program at SFA as Director. During this time, Don also graduated from the SFA, managed the university’s food services, was a coach and scout leader, and made many friends. Together, Pat and Don have built a family that works in art, law and business. They collectively have six degrees from Yale; three from SFA; two from Harvard; and one each from Columbia, Emory and the University of Texas. Pat’s older sister Pam Morris died in 2021. Pat is survived by son Blake and daughter Melanie of Nacogdoches; son Barry and his wife Nancy Barnett of Dallas; his sister Peggy Schneider and her husband, Reverend Dave of Fort Worth; sister Priscilla Clore of Waxahachie; brother John Alexander Anderson, IV, and his wife Cathy of Shreveport; sister Jean Williams and her husband Ron of Nacogdoches; sister Joan Taylor and her husband Kim of Nacogdoches; granddaughter Caroline Reeve and husband Nate of Houston; grandson James Barnett of Dallas; grandson Chase Barnett of Houston; and several nieces, nephews, cousins ​​and friends. A funeral service at Oak Grove Cemetery near Kerens will be held on May 28, 2022. A celebration of life and reception is planned for September at Westminster Presbyterian Church in Nacogdoches. Pat’s family asks anyone wishing to commemorate her to do so by contributing on her behalf to the Music Prep Division of the SFA, by mail or in person at the Music Prep House, 3028 Raguet Street, Nacogdoches, Texas 75965, or by online at sfamusicprep.com. Fond memories and expressions of sympathy can be shared at www.casonmonk-metcalf.com for the Barnett family.

My Chemical Romance in Cardiff: what time does it start, set list, where to park and prohibited items you cannot bring