Just about everyone, from political elites to dump truck drivers in the Southeast, can agree on one thing: Change is coming, and it is coming with the wind. Call it climate change, call it an act of God, call it what you want, but these winds have been blowing for some time and extreme weather events are piling up with increasing frequency and intensity. Owner-operators face it on the road – or even at home.

In the West, the pace and extent of wildfires have increased, Texas froze in 2021, snow and ice completely shut down I-95 in Virginia for more than a day in January, and a Dense fog caused accumulations across the country.

Headline-grabbing events sure turn heads, but in some ways the new routine is the same as the old one. As any professional on the road knows, the weather is always a daily consideration. Yet there is a new urgency to planning routes.

Take April, for example: 2022 saw the windiest April in the Dallas-Fort Worth area, as well as Midland, Texas, and also in Iowa, Indiana, Missouri, Colorado, South Dakota and just about everywhere else.

Chuck Winborn, a Birmingham, Alabama-based owner-operator, absolutely rejects the popular notion of climate change, but nonetheless, his business hauling asphalt for interstate paving means he’s extremely tuned in to the wind, with a “35-foot frameless trailer,” he said. “And if I lift it, it’s an aluminum trailer, and the wind is gusting… A frameless trailer doesn’t have much integrity once it’s in the air. The word is That it’s not if, but when you’re going to flip a trailer.

Not that he hit that when just now. “In five years, I have never returned one.”

“I’m really careful about it. If I return a trailer, I cannot find another one. I have to go to the shop and get it fixed,” he said, referring to the continued shortages of trailer equipment.

[Related: To own or not to own a trailer: How COVID fast-tracked an explosion in power-only trucking]

So far this year, Alabama has seen more than 120 tornadoes watch, more than any other state. According to Winborn, the weather has about as much say in his schedule as he does.

On Thursday, May 26, the day this article was published, much of Alabama found itself in the grip of a fringe tornado watch.“Hauling asphalt is a seasonal business because when you haul asphalt for the Alabama highway, you can’t work in temperatures below 60 degrees. If it’s 60 degrees or less, they won’t allow us to lay asphalt on the highway,” he said. “This thing is 325 degrees, so you don’t need pouring rain to cool this down. Usually if it starts raining, they’ll call it.

But, like so many resourceful owners, Winborn finds plenty of other gigs for his gear when time gets in his way. “Usually I stop hauling asphalt around Thanksgiving until the weather starts to turn, that’s when I’ll go hauling other forms of aggregate like rock, sand or coke.”

Windburn recalls close calls during his 38-year career. These included episodes before he was pulling dump trailers, carrying military explosives in high winds, having “gusting winds to the point that he lifted my trailer off the ground”, seeing debris from a tornado flying around his truck and having to park facing into the wind to avoid being run over.

For the most part, though, Winborn gets things done come rain or shine, as does owner-operator Howard Salmon of Anderson, Calif. Salmon, who mostly hauls refrigerated in a 1999 Kenworth W9 with beautifully salvaged wood inside, said the biggest impact of the extreme weather hasn’t hit his business, but his life at home.

Although Salmon has extensive experience with winter driving, as well as driving through and around wildfires, living in a drought-stricken region colors his day-to-day experience much more.

“Shasta Lake is like a stream, it’s really bad,” Salmon said. “They stopped rice production this year because they need a lot of water. Drought affects many people. The wildfires are also impacting businesses in the region, with subsequent impacts on freight out of the region. “The sawmills,” added Salmon. “Sometimes they ignite.

[Related: Winter trucking tips that could actually save a life] 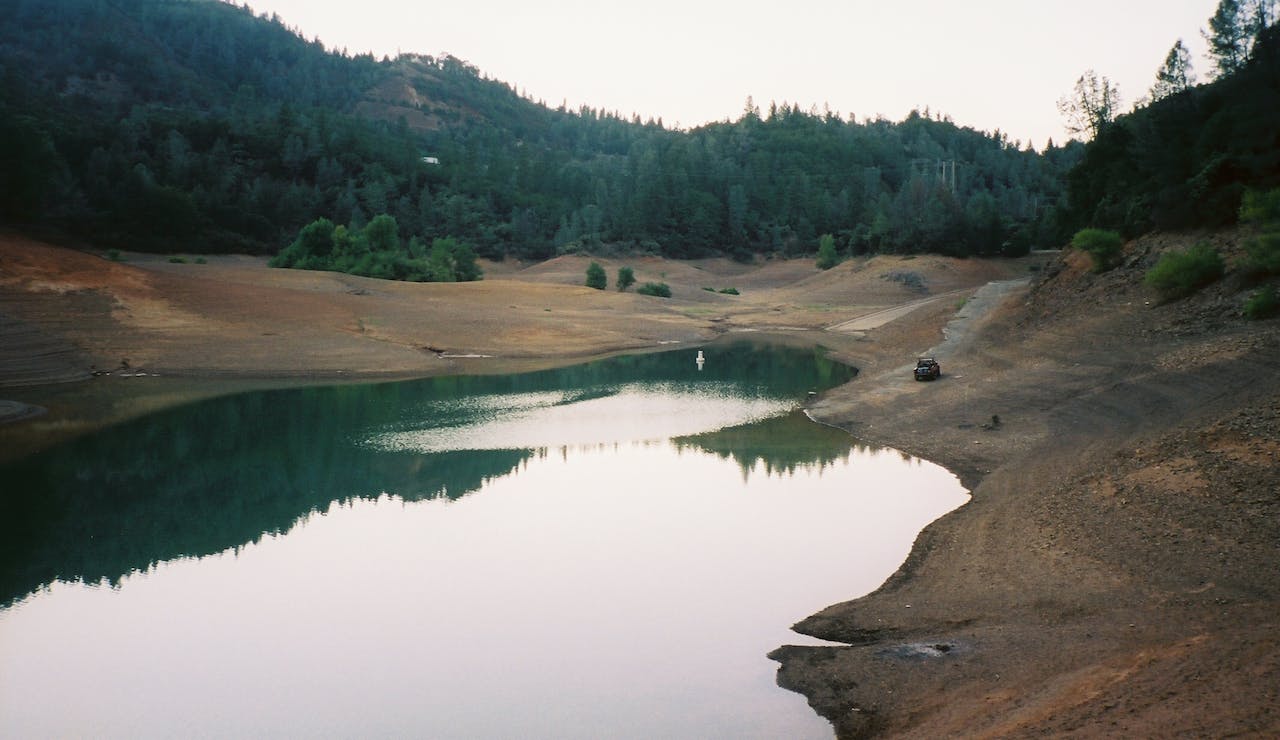 Although Salmon makes a living delivering fresh produce and other chilled goods to distribution centers and stores, working through a prime broker, he now faces bare shelves in his local stores. “Racing should be [their products] somewhere,” he said. Given California’s drought conditions, “currently the impact is a lack of food on the shelves.”

Simultaneously, the business environment with its soaring fuel and parts prices is testing its livelihoods, as well as nature.

As trucking gets a lot of flak for its carbon footprint and reliance on fossil fuels, Salmon urged those on the outside to consider its rig’s fuel mileage, still 6mpg – at diesel prices of the west coast about a dollar a mile in fuel to run — and “understand that I’m trying to do the bare minimum to survive and get my groceries and get them to the store,” he said.

Overall, for salmon, the extreme weather lately looks like “not much more than a sunny day” as California languishes in a years-long drought. The large fires of the last year have moved closer to his neighborhood, never crossing a river between his property and the nearest fire. He’s certainly seen the increasing pace of wildfires and joked about the “folding power” of the incredible winds on the plains, but Salmon is like all of us when it comes to the weather: an observer, playing with the maps which he distributed.

These owner-operators perform the absolutely essential, non-negotiable tasks of feeding our communities and building our roads. In doing so, they struggle with the weather as much as anyone. As long as the stores still need products and the roads still need to be paved, they will head to the storm to do it.

[Related: Are truckers protected by law from refusing to drive in bad weather?]

Why the DTC Mosaic brand opened a frozen-only grocery store