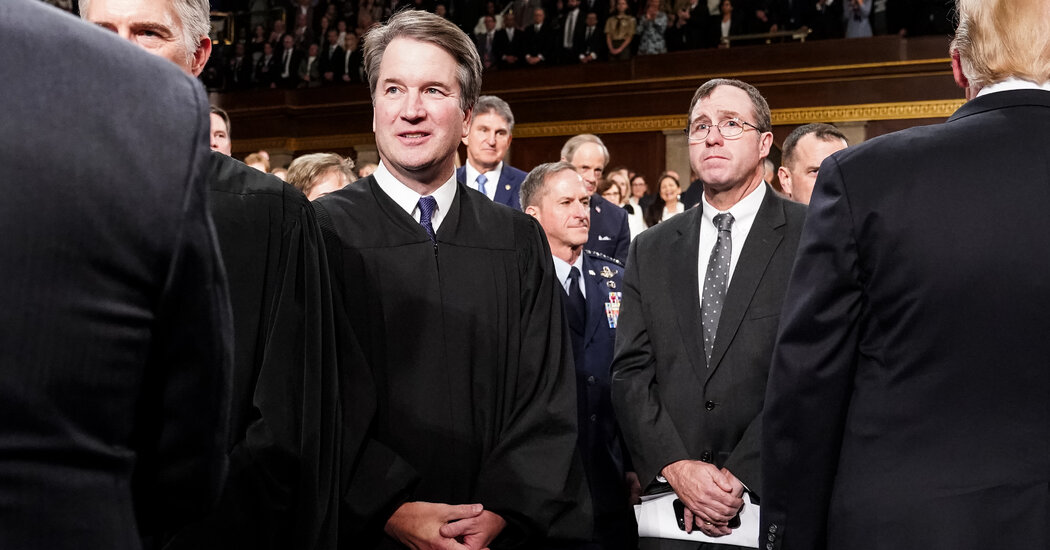 A man armed with a gun, knife and other weapons was arrested near the home of Justice Brett M. Kavanaugh in Maryland early Wednesday after he said he traveled from California to kill the Supreme Court Justice, federal officials said.

Nicholas John Roske, 26, of Simi Valley, Calif., was charged with attempted murder after two deputy U.S. marshals saw him get out of a taxi outside the judge’s home in Chevy Chase, Maryland, early Wednesday morning, dressed in black and carrying a suitcase, according to the U.S. Attorney’s Office in Maryland.

Mr. Roske saw the two deputies, who were standing next to their parked car, and walked down the street, according to a federal affidavit.

Shortly after, the Montgomery County Emergency Communications Center received a call from Mr. Roske, who said he was having suicidal thoughts and had a gun in his suitcase, according to the report. affidavit.

He said he traveled from California to Maryland “to kill a specific Justice of the Supreme Court of the United States,” the affidavit states.

Mr Roske told police ‘he was upset by the leak of a recent Supreme Court draft ruling regarding abortion rights as well as the recent school shooting in Uvalde, Texas’ , says the affidavit. “Roske indicated that he believed the justice he intended to kill would side with Second Amendment rulings that would relax gun control laws.”

When authorities searched his suitcase and a backpack, they found “black tactical chest gear and a tactical knife,” a pistol with two magazines and ammunition, pepper spray, zip ties, a hammer, a screwdriver, nail set, crowbar, gun light and duct tape, in addition to other items, according to the affidavit.

If convicted, Mr. Roske faces up to 20 years in federal prison. He was scheduled to appear in US District Court in Maryland on Wednesday afternoon.

The affidavit did not identify the judge Mr Roske had threatened to kill, but Supreme Court spokeswoman Patricia McCabe said the arrested man was found near Mr Kavanaugh’s house.

The arrest, which took place around 1:50 a.m. Wednesday, was reported earlier by The Washington Post. In a statement, the FBI said it was aware of the arrest and was working with law enforcement.

The man was arrested without incident near the judge’s home in Chevy Chase, outside Washington, said Shiera Goff, spokeswoman for the Montgomery County Police Department.

Mr Roske told police he started thinking ‘how to give his life a purpose’ and decided to kill a Supreme Court justice after finding his address online, according to the affidavit .

His plan was to break into the house, kill the judge and then kill himself, according to the affidavit.

The US Marshals Service said marshals helped arrest the man.

As news of the arrest circulated earlier Wednesday, Governor Larry Hogan of Maryland said in a statement that he asked Attorney General Merrick B. Garland in May to increase security outside the homes of the judges.

“I call on leaders of both parties in Washington to strongly condemn these actions unequivocally,” said Gov. Hogan, a Republican. “It is vital to our constitutional system that judges can carry out their duties without fear of violence against them and their families.”

At a press conference Wednesday to discuss the investigation into the fatal school shooting in Uvalde, Texas, last month, Mr. Garland said the threat against Judge Kavanaugh was “behavior that we don’t not tolerate”. He added that last month he had “expedited protection of all judges’ residences 24 hours a day, 7 days a week”, and that he had met with the Supreme Court Marshal, the FBI, the United States Marshals and its own attorneys to “ensure that every degree of protection available is possible.”

“Threats of violence, and actual violence, against judges, of course, strike at the heart of our democracy,” Garland said. “We will do everything we can to prevent them and to hold those who commit them accountable.”

There have been protests outside Justice Kavanaugh’s home and the homes of other justices since a draft Supreme Court opinion was released last month suggesting the justices were set to overturn the landmark ruling of 1973 Roe v. Wade which guarantees the right to an Abortion.

In a bulletin released Tuesday, the Department of Homeland Security said that after the release of the leaked draft advisory, abortion rights advocates “encouraged violence” in public forums, “including against the government, religious and reproductive health personnel and facilities, as well as those with opposing ideologies.

Senator Mitch McConnell of Kentucky, the Minority Leader, called on the House to pass a Supreme Court security bill that would provide police protection to the immediate families of the nine justices. The Senate passed the bill unanimously in May.

“No more playing around with it,” McConnell said in the Senate on Wednesday. “Pass it before the sun goes down today.”

Sen. Ben Sasse, Republican of Nebraska, said in a statement that President Biden “must personally and strongly condemn the violence and threats against Supreme Court justices.”